If your looking for an easy, compact game to help improve your child’s spelling then look no further than the Fletter Word Game.

Aimed at 8+ Fletter uses letters to build up words but unlike most other word games that are rather slow moving and allow players to take your time Fletter is all about full-on action-packed speed. As letter cards are laid down on the table players have to be able to act fast and claim words that they see. Once all the cards have been dealt players add up their points to see whose won. There are 100 letter cards and 10 Fletter Cards in the pack… say or spell a word wrongly and you’ll be given a Fletter Card (and as a result loose 2 points for each card at the end of a round).

To play cards are well shuffled and then all of them dealt out between the players. The game says it’s for 2-4 players but I fell you could extend this to 6, possibly 8 depending on age.

There are four rounds to the game.

A three letter round…

A four letter round… 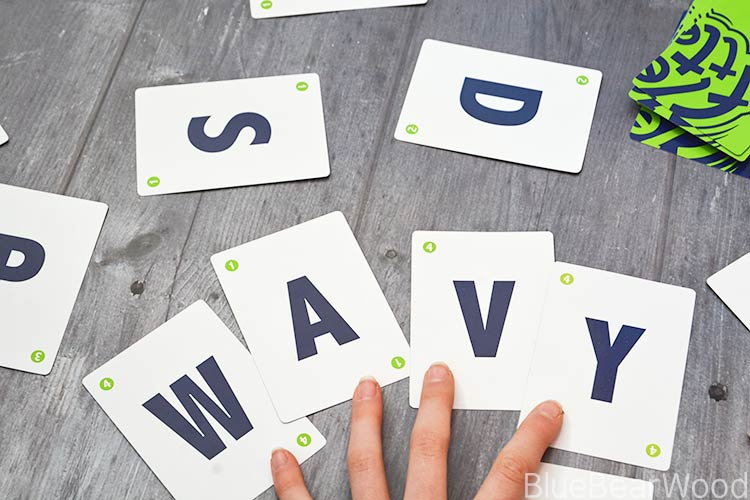 A five letter round …

And a 6 letter round.

For each round players lay their pile of cards face down in front of them and then take it, in turn, to lay one face up (letter showing) in the center of the table. This continues until all the cards have been laid down. If a player sees’s a word of the correct ’round’ length at any time (so it must be a four-letter word for the four-letter round) they shout it out. If they are correct that player gets to keep those cards. If two or more players say the same word at the same time then the cards are put in a discard pile and if a player says a wrong word then they are given a ‘Fletter’ Card.

At the end of each round the points on the card are added up (any Fletter card amounts are taken off)  and the total s written down.

The game gets quite strategic the more you play it as certain letters are worth more points.

It’s perfect for children and adults form 8+ (I would use it with younger children and just stick to 3 or 4 letter words) and it can easily be adapted to suit the different needs of children. Although it will help to expand your childs vocabulary this is more about common letter/word recognition and processing speed. I love that each round has a specific word length (it caught all of my girls out to start with as they kept seeing longer words). And it’s a lot harder than you think.

It’s like the letter equivalent of UNO… the perfect take anywhere, play anywhere game that anyone can join in with!

You can find out more from fletter.co.uk