With great excitement, Ra lowered The Real Talking Harry Potter Sorting Hat onto Ro’s Head. What house would she be put in!?

“There’s nothing hidden in your hat…’, the Harry Potter Sorting Hat began…

Like lots of children (and adults) my girls are massive fans of Harry Potter. Ro, in particular, has read and re-read the Harry Potter Box Set many times along with watching the movies. We have wands, notebooks, jewellery, Funko models to name but a few and now we have the amazing talking Harry Potter Sorting Hat!

It’s beautifully made with great attention to detail and makes a fabulous ornamental toy. The fabric used is lusciously soft and the facial feature is perfect along with the recorded voice. It really does look and sound just like the real sorting hat from the Harry Potter movies thanks to the clever animatronics.

On the downside, the hat is a fixed size and a little on the small size but you can fit it on bigger heads by positioning it on the crown of the head rather than the top. It’s also a little wobbly when on, due to the talking mechanism,  so definitely not a hat that can be worn whilst charging around on wizardly adventures.

How Does The Talking Harry Potter Sorting Hat Work

The hat comes with batteries (it needs 3xAA) and you turn it on with a switch underneath a flap inside the hat. To get the hat to speak you press a cleverly concealed button on the right-hand side of the hat. Houses are chosen at random (or are they?) but the lead-up story doesn’t change, so once you’ve heard it a few times you do want to cut to the chase and just find out what house you’re in. Unfortunately, you have to wait for it to go through the whole ceremony to do that… although that’s not very long.

Spookily it did have a tendency to always put each of us under the same house whenever we tried it! 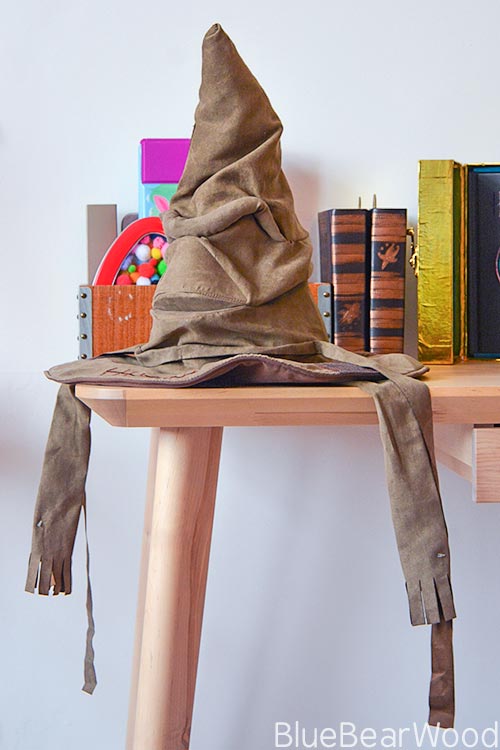 This is a luxury toy that Harry Potter fans are going to love. It is, without doubt, great fun finding out what Hogwarts House you belong to. It’s just a shame that the lead-in script doesn’t alter. But that’s a small niggle because, above all else, the Harry Potter Sorting Hat looks amazing and will take pride of place in all children’s bedrooms.

Aged 5+ it has an RRP of £39.99 but if you shop around the price varies a little. You can currently buy it from Argos and Amazon.