We made these Jubilee felt pinwheels to wear for the Queens Diamond Jubilee celebrations but they would work equally well for 4th of July fun. You can use them to make hair accessories, necklaces, bracelets brooches. They work as an embellishment on pretty much everything.

1. Cut out approx 2 inch felt circles. You will need to different coloured circles for each pin wheel. I used an old bottle lid which was slightly bigger than 2 inches. 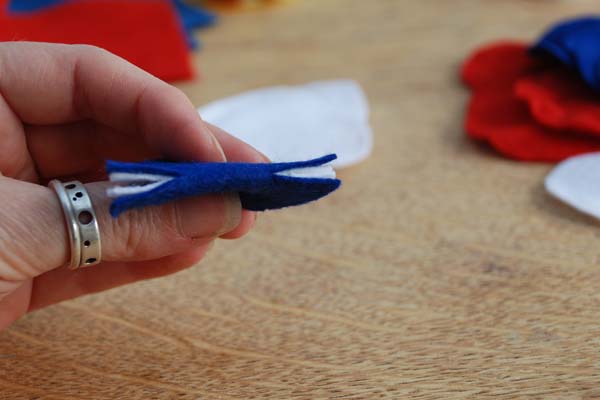 4. Fold the remaining corners in and sew them in place. You should now have a pinwheel that looks like this. Don’t worry if your stitches show at this point as they will be covered by the pom pom or button.

5. Take a pom pom or button in the missing colour, put it in the center of the pin wheel and sew in place. You could glue the center embellishment on if you prefer.

6. Your pinwheel is now finished. These ones with the buttons are going to be glued on to a felt crown I am making for the girls for the Queens Diamond Jubilee celebrations. 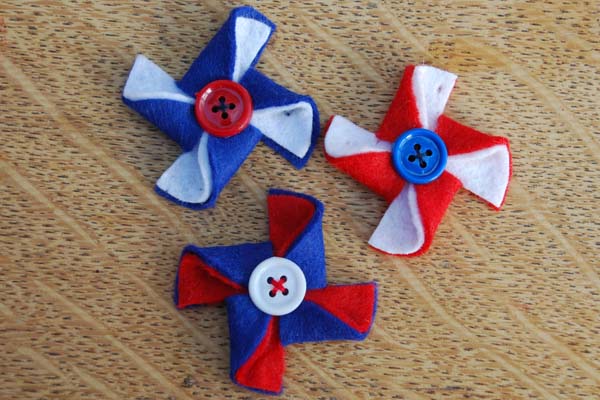 7. I made some other pinwheels with pom poms in the middle that I made hair accessories out of. For the bobble you need to sew the felt on either side of the felt square. For the hair slide I sewed the felt square on first and then slid on the hair grip. You can also thread them on to ribbon, tulle, a necklace, string … the list is endless.

I love them. So easy to make, very effective and a nice accessory for the upcoming Queens Diamond Jubilee celebrations