This papier mache volcano was so much fun to make and it’s still going strong nearly 10 years later. It’s been played with loads and taken into school for topic work a few times by all three of my girls. The best part is it’s made from your garbage, it’s great fun to make, looks really impressive, will last for years, has a central storage core and is a real memory maker. 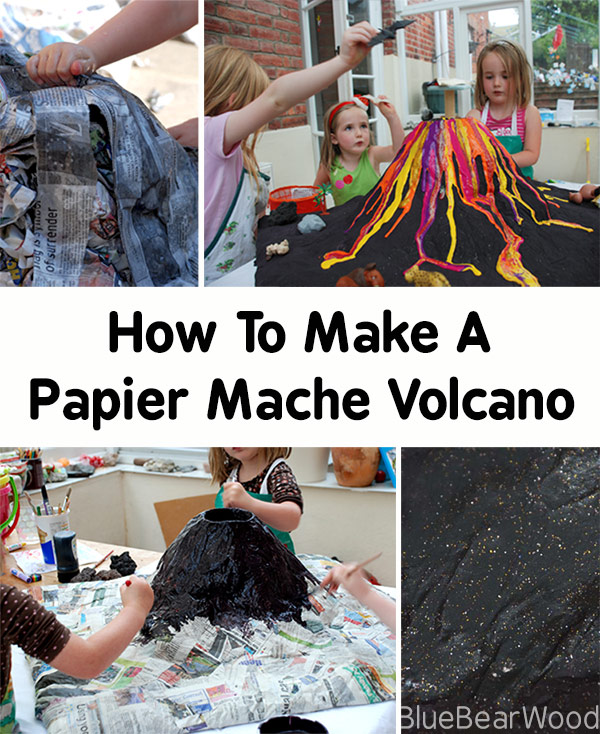 Papier Mache is a great hands-on craft activity for kids and adults and you can make lots of different types of crafts using it and although it can take a while to dry out produces an incredibly strong and durable craft. Here’s one of my smaller projects… little teeny Papier Mache Elf Shoes, I’ve also made cute little Papier Mache Shelves for collectables and the base of my Norman The Slug costume was a Papier Mache Doughnut! You can also buy Papier Mache Pulp which is great for creating shapes on canvas like this fantastic Mermaid Collage. 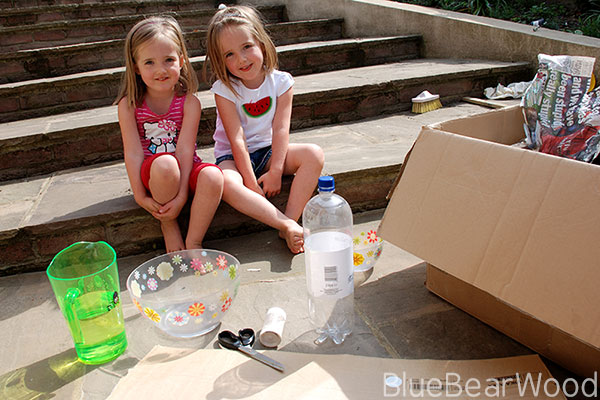 How To Make A Papier Mache Volcano

Make up a large quantity of adhesive paste. We used cellulose adhesive which has a similar consistency to wallpaper paste but contains no fungicide and is safe for children to use. It’s relatively cheap, easy to mix up (just add water) and the kids love it. You can water down PVA glue or make your own flour and water paste. 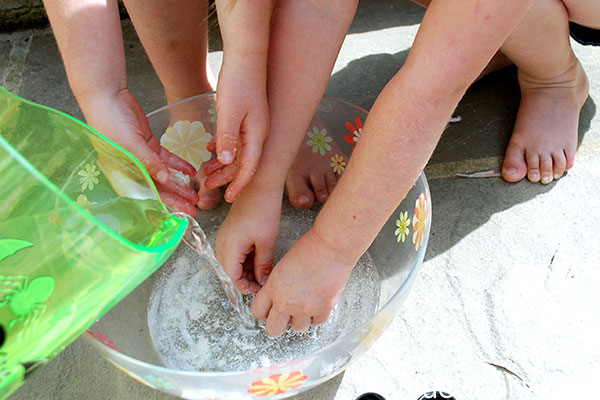 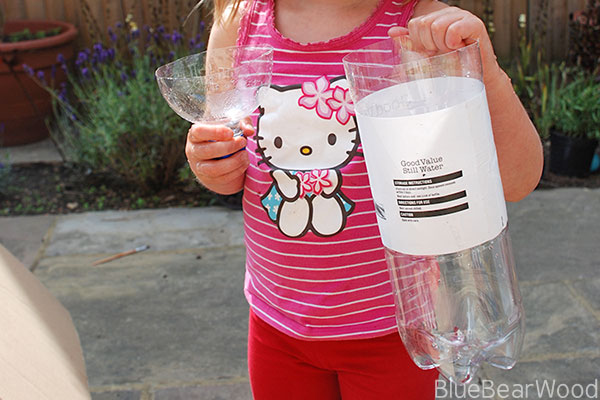 Put the bottle in the middle of your large cardboard base. Scrunch up the newspaper, dip it in the adhesive paste and build up your volcano shape around the bottle. 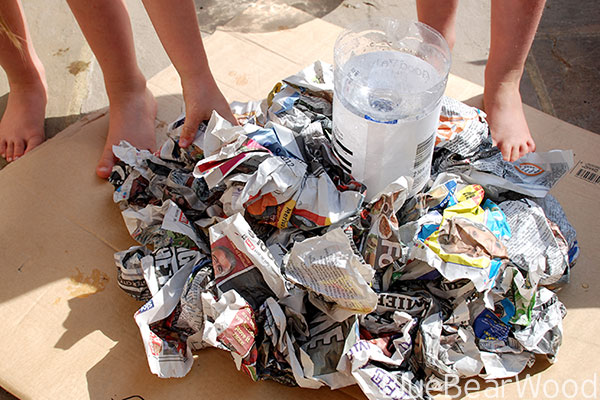 Once you’ve built the main volcano shape cover the rest of the cardboard base. 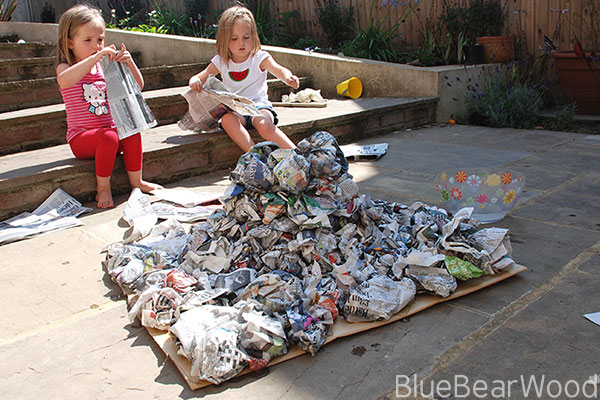 Tear the remaining newspaper into strips and use the remaining adhesive paste to stick the strips over the volcano to make a smooth surface. You will need to cover with at least 2 to three layers of newspaper. 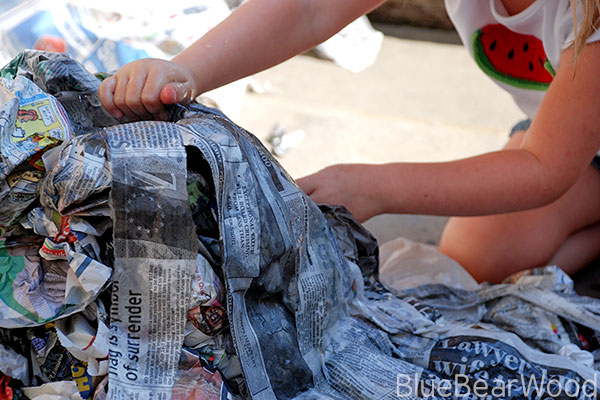 The finished volcano should end up looking similar to this. You will need to leave the volcano to dry for a few days. Try and leave raised off the ground so the underneath and main bulk of the volcano can dry properly. Do not leave the volcano on furniture as the underneath gets very wet and will cause damage. We covered a table with plastic sheeting and raised it using some large lego pieces. 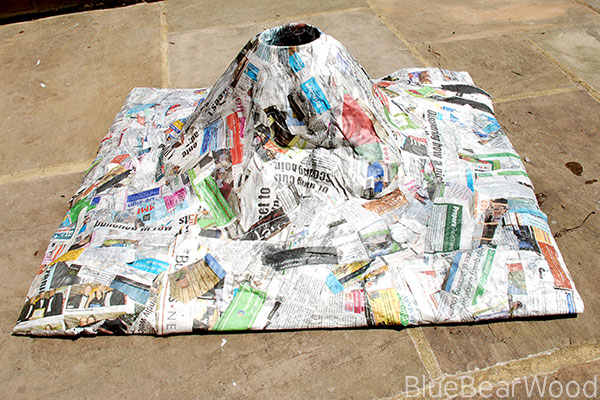 7. Mix up some paint and paint your volcano. We made a purple-brown colour and added gold glitter so that our volcano had minerals. You’ll need to do a couple of layers allowing the paint to dry between each one. 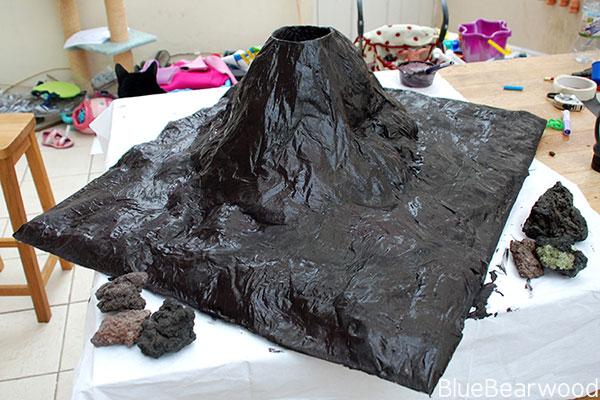 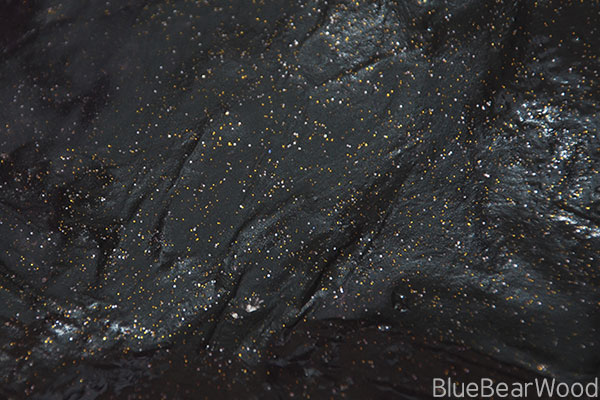 When the base paint has dried squeeze paint out of the paint bottles to create lava runs around the top of the volcano. The girls had great fun watching the paint dribble down the volcano. We added a few trails of glitter paint at the end. 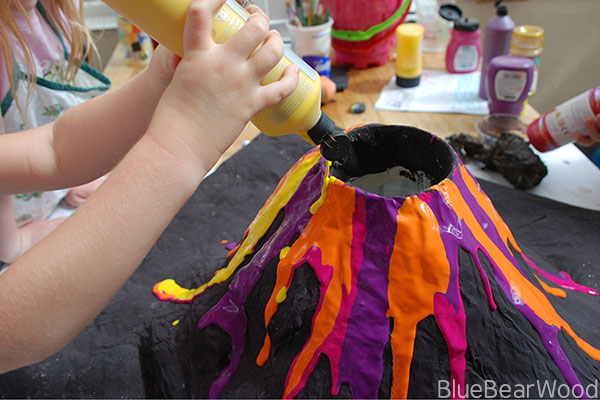 Add some animals and bits of rock and let your imagination run free! 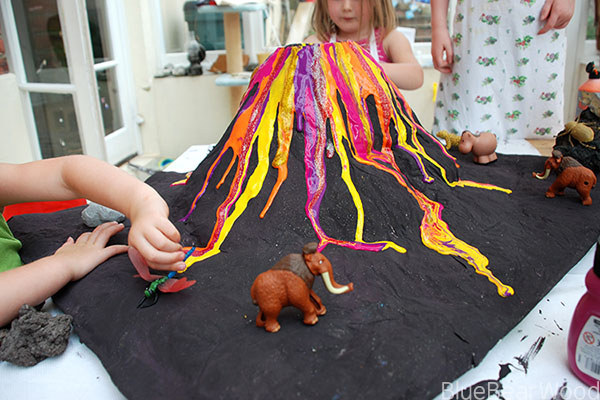 We were originally going to have a ‘live’ volcano by using a bicarb and paint mix to spill out of the top (hence the use of the plastic bottle) but by the time we’d finished it looked so cool we decided that we didn’t want to spoil it with a wet lava mix. Instead, we use the bottle as storage for all the plastic animals.